Some of the biggest savings come from reclaiming so-called waste heat from the refrigeration equipment that keeps groceries cold. The stores also have a new system for keeping refrigerated food cold that lowers the use of refrigerant by 90 percent and in turn reduces greenhouse gas emissions.

Other whistles and bells include motion-sensitive light-emitting diodes (LED) in refrigerator and freezer cases that turn on only when a shopper walks by, doors in the meat and dairy refrigerated sections instead of open refrigerator shelves, a white roof that keeps the building cool in summer and roughly 200 skylights that allow electric lights to go down when the sun comes out.

In all, this design is supposed to save 25 per cent on a store’s energy consumption.

Wal-Mart may be the single company with the most invested in the existing — dying — system of acquiring, moving and selling merchandise. It sources things manufactured inexpensively abroad, hauls them enormous distances, sells them in very large stores often located in box-store complexes pretty far removed from residential areas.  Expensive energy, in any form, hits Wal-Mart hard. So naturally the company has the most incentive to cut waste as much as possible as quickly as possible.

Whether the business model is sustainable with $100-a-barrel oil, even in heavily modified form, we’ll have to see.

Latest column, on the NRDC campaign against the tarsands 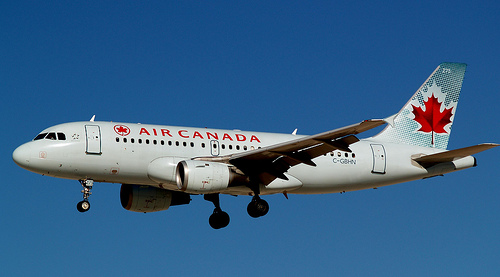 My latest column for the Ottawa Citizen is here. It’s on this Natural Resources Defense Council campaign to get North American airlines to swear off fuel that comes from Alberta’s tarsands and from liquefied coal.

In Canada, we still have generous federal tax treatment for new oilsands projects, which amounts to a subsidy. Alberta’s Premier Ed Stelmach has decided to increase his province’s share of the profits from projects that extract publicly owned oil, but his province is still an impressively easy place to make oil money, for companies with the capital to put up to get started. Alberta is the only province to put a real price on greenhouse-gas emissions, although the price is low — $15 per tonne of carbon dioxide beyond a set limit, far below the $50 or so for every tonne that’s at the low end of expert estimates of what we should have to rein in climate change.

In the United States, politicians from coal-mining states are delirious over the prospect of a massive new market for their dusty black gold, and they’re pushing subsidy programs to develop coal-liquefication technology like there’s no tomorrow.

So we do make environmental degradation more appealing than it needs to be, and the Natural Resources Defense Council is doing its job by pointing that out. Asking airlines to join in the fight, however, is a bit like asking golf-course operators to fight for more restrictions on water use, or for high-rise dwellers to call for an elevator tax. It’s not just difficult, it’s diametrically opposed to their interests. At heart, flying planes is a fuel-burning business and jet fuel is the airlines’ lifeblood.

A point I already wish I’d made more strongly is that airlines already have every economic incentive in the world to make their planes as efficient as possible, even if there are limits to how far that can go. It’s also spawned me an interesting e-mail debate on whether flying or driving is a more efficient way to cover a moderate distance.

The value of efficiency

UPS is, basically, in the driving business. Driving costs money — more and more all the time, given the cost of fuel these days. So UPS decided to get smart, and plan its routes better. Reports the New York Times:

The company employs what it calls a “package flow” software program, which among other hyperefficient practices involving the packing and sorting of its cargo, maps out routes for every one of its drivers, drastically reducing the number of left-hand turns they make (taking into consideration, of course, those instances where not to make the left-hand turn would result in a ridiculously circuitous route).

Last year, according to Heather Robinson, a U.P.S. spokeswoman, the software helped the company shave 28.5 million miles off its delivery routes, which has resulted in savings of roughly three million gallons of gas and has reduced CO2 emissions by 31,000 metric tons.

The business with the left-hand turns is about reducing the amount of fuel wasted running engines while waiting for breaks in oncoming traffic. It’s not realistic for the average person — calculating which left turns are worth the wait and which ones are better achieved with three rights is no doubt stupendously complex — but when this much fuel and money can be saved thanks to economies of scale, I’m glad to hear UPS is doing it.

This sort of thing gives me hope. The biggest companies — consider Wal-Mart, which, like the military, is mostly in the business of transporting large amounts of stuff over large distances — take a lot of heat for wasteful practices, but they also have the most direct incentive to clean up their acts.

Guilt is an ineffective tool

This is a touch depressing, or would be if it were strictly true. Reports the CBC:

Canadians have gotten a little bit greener over the past 12 years, especially where governments passed laws to force behaviour changes, a newly released survey suggests.

But in other areas, consumers are acting just as they did in 1994, says a Statistics Canada report released Wednesday.

In two areas where there were big changes — garden pesticide use in Quebec and composting in the Atlantic region — governments compelled greener behaviour.

Nationally, chemical pesticide use fell an insignificant two percentage points between the two surveys. But in Quebec, “where strict regulations on pesticide use were imposed in recent years, the proportion [using pesticides] plunged from 30 per cent to 15 per cent,” the survey said.

As for composting, while there was a slight national increase, the gain was “especially large” in the Atlantic provinces, “some of which prohibit the disposal of organic materials in landfills or incinerators.”

What the CBC appears to miss is that consumers also responded strongly to price signals where they’ve been visible, mainly in household energy use. From Statistics Canada’s survey:

Households are taking advantage of new power-saving devices, the survey showed. Between 1994 and 2006, the proportion using at least one compact fluorescent light bulb more than tripled from 19% to 59%.

Households in all provinces contributed to this rise. In 2006, British Columbia and Ontario had the highest percentage of households using compact fluorescent light bulbs, nearly two-thirds in each province. In contrast, only one-half of all households in Quebec used them.

Programmable thermostats, which automatically adjust the temperature setting, have become increasingly popular. In 1994, 16% of households with a thermostat had one that was programmable. By 2006, this proportion had more than doubled to 42%. On the other hand, among households that had such a device, about 16% had not programmed it.

In Ontario, 52% of households had a programmable thermostat, more than double the proportion of 24% in 1994. Households in the Atlantic Provinces were the least likely to have one.

Quebec has very cheap power as a matter of government policy and provincial pride; Ontario’s gone to something more closely resembling market prices, albeit with very deep government involvement still in the electricity sector. Quebecers also disproportionately use their inexpensive electricity for heat while Ontarians use oil and natural gas, whose prices have been even less cushioned as a matter of public policy.

Astoundingly, the agency also found three in 10 Canadian households mainly use bottled water (you have to dig into the survey questions [PDF] to find that tidbit) for drinking.

What’s very clear from these results is that guilting and pleading with people don’t work.

Poll finds complaining is the No. 1 response to “high” gas prices

A Washington Post–ABC poll confirms that consumers expect the only change in their habits caused by higher gas prices is an increase in complaining at the pump:

The average price that drivers said would compel them to significantly cut back on their driving was $4.38 a gallon. In the western United States, where gasoline prices are typically higher than in the rest of the country, the average respondent said the price would have to hit $5.12 a gallon.

In fact, the federal Energy Information Administration (EIA) yesterday reported that gasoline consumption last week was up 2.6 percent from the same week a year earlier, slightly higher than the trend so far this year.

The B.C. Chamber of Commerce — “The voice of B.C. business” — endorses road tolls as a way of making users pay for consuming a public service and, incidentally, keeping traffic from getting any more out of control than it already is.

The proposal is, as I read the Vancouver Sun‘s story, subject to approval by the chamber’s members at an annual general meeting.

“The chamber realizes that while this may be unpopular for many we cannot fool ourselves any longer, there is a need to look to the greater good and that greater good is ensuring that the road network facilitates the movement of goods and people,” John Winter, chamber president, said in a statement.

And it’d help make public and shared transportation more competitive with driving single-occupant vehicles on massively subsidized roads and discourage sprawl by imposing some of the public costs of distant development on the people who choose to live in it.

This actually might be less controversial in British Columbia than elsewhere, for two reasons. One is the abysmal state of traffic in the Lower Mainland, particularly along Highway 1 running up the Fraser Valley (one long road serving essentially all of Vancouver’s suburbs). Trains and HOV lanes help, but not enough.

The second is that B.C., being crisscrossed with rivers and canyons, is already heavily laden with toll bridges and fee-charging ferries. Drivers are accustomed to paying to use expensive public infrastructure, since levying these charges was the only way a lot of it would ever have been built.

Road tolls for major stretches of highway — already charged on the Coquihalla in the mountains — are just applying this thinking to the next level of infrastructure down.

Democratic presidential candidate and Illinois senator Barack Obama wants America’s Big Three automakers to crank up their fuel efficiency standards … and he’s willing to pay them $10 billion in taxpayers’ dollars to do it. The money would be handed over in subsidies to retool plants ($3 billion) and in federal help for the companies’ troubled health-care plans for retirees (up to $7 billion).

The health-plan help is probably partly a ploy to get these three enormous employers to support federally-funded health care for all Americans.

America’s Big Three — Ford, General Motors and Chrysler, though it’s still German-owned at least for now — gambled huge on a strategy of producing big, high-margin vehicles like SUVs and pickups, and they lost huge as the price of gasoline climbed starting a few years ago. No informed consumer would buy one of these now without a good and specific reason (working in construction or agriculture, say) or a million dollars in the bank. The era of big-truck-as-declaration-of-manhood might not be over, but it’s no longer within reach of most customers, even with generous financing plans. Even if the price of gasoline dips again, the writing’s on the wall.

Asian and European automakers make small cars and lots of them, so they’re perfectly placed to take advantage of a consumer trend toward such vehicles. And, indeed, they make a fair number of their vehicles in North America. (Here’s a summary of Toyota’s operations, for instance.) But now a major presidential candidate wants to subsidize their competitors’ recovery from what was, simply, a lousy business decision.

These are like agriculture subsidies: they distort the market and force other governments (such as Ontario’s; the undated story is from 2004) to match the subsidies just to keep the playing field level.

Does anyone seriously believe there won’t be enough cars to buy if governments don’t spend tax money to keep three failing manufacturers from suffering too badly from their mistake?

The EcoLibertarian
Create a free website or blog at WordPress.com.